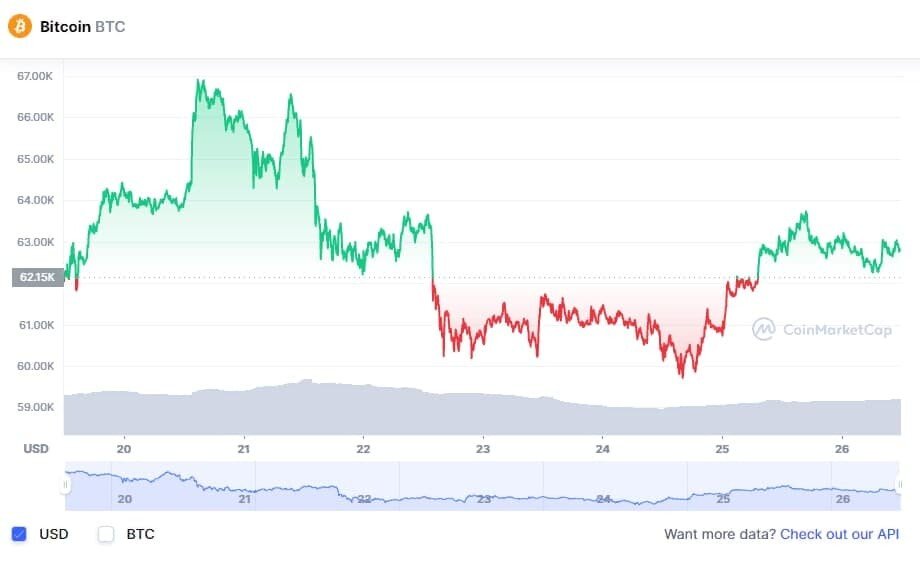 Over the weekend, the rate of the first cryptocurrency fell below $60,000. Analysts found that a significant correction was provoked by short-term traders. Speculators entered the market, which caused a massive pullback, arranging a sale at the peak.

However, fundamentally, no significant and negative changes have yet been recorded. Stablecoins continue to enter the exchanges, which means that investors are preparing to resume buying cryptocurrency in the very near future.

Another important event in the crypto world will be the launch of the LocalBitcoins mobile application. This platform has been serving traders around the world for several years. Now she wants to make it easier for users to access her services and introduces an application for Android devices.

Heroes of the occasion

On October 24, the price of bitcoin on some exchanges fell to $59,798. Recovery began last Monday. It was slow and fueled by increased support from investors who purchased coins at higher values. On Tuesday, October 26, the BTC rate strengthened to $62,500. The capitalization of the first cryptocurrency now stands at just over $1.185 trillion. CryptoQuant analysts found that Bitcoin’s fall over the weekend was triggered by short-term traders tuned in to maximize profits from BTC peaks.

Speculators took part in the cryptocurrency pump last week and started selling in the spot market at the moment when bitcoin was trading above $66,000. With the SOPR indicator being above one, this means that all sales were taking place at a very good profit for sellers .

Researchers call short-term traders those market participants who regularly move coins depending on the current situation. Sometimes transactions are made every hour if there is turbulence in the market at the moment.

Long-term investors, or the so-called hodlers, on the contrary, demonstrate an accumulative strategy even at those moments when the price of bitcoin is growing. Such BTC holders refuse to sell even when the cryptocurrency begins to rapidly lose ground.

What does the influx of stablecoins to exchanges signal?

Stablecoins are traditionally used to purchase cryptocurrencies on spot exchanges. The most sought-after fiat-backed tokens are Tether and USD Coin, with supply this week reaching $69.681 billion and $32.549 billion, respectively.

If the influx of stablecoins to trading platforms increases, then this indicates the willingness of investors to increase their purchases of bitcoin or other cryptocurrencies. And vice versa, if the flow of tokens to exchanges is reduced, then traders switch to waiting tactics. CryptoQuant has found that the number of addresses sending stablecons to exchanges is on the rise. Most likely, we are on the eve of the next bitcoin run. However, it is now difficult to predict even the approximate time the market will enter the bullish phase.

It must be remembered that not all stablecoins directed to trading platforms will be used to purchase BTC. Part of these tokens will be spent on the purchase of altcoins, which are again trying to gain a foothold in the green zone today.

Bija Okcoin published a study in which she drew attention to the growing interest of institutional investors in altcoins. In about a year, trading volume involving financial institutions increased by 124% on the platform.

The number of users representing hedge funds and companies skyrocketed by 450%. More than half of the transactions implemented by institutionals fell on altcoins, Okcoin analysts emphasized.

“Institutional activity on the platform indicates positive sentiment among large investors, as well as clients, asset managers, hedge funds and brokers,” the authors of the report noted.

LocalBitcoins launches its own mobile app

Another important event was the appearance of the LocalBitcoins mobile application for Android devices. The iOS version is still under development, the company said in a press release.

LocalBitcoins is known for its focus on emerging markets, including Latin America and the post-Soviet space. The application will be equipped with the same functionality as the PC version. Users from 190 countries will be able to download the service.