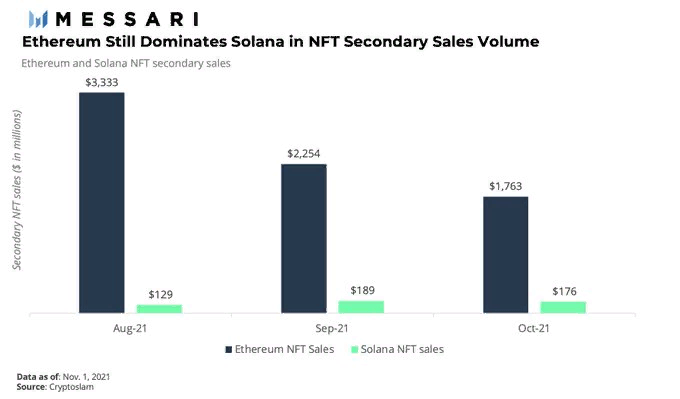 The majority of large investors are engaged in the accumulation of bitcoins. This is evidenced by data reflecting the volume of cryptocurrency, which is placed on addresses that control at least 1,000 BTC.

Meanwhile, the expansion of Ethereum (ETH) continues. The growth in the value of the altcoin is supported by the improvement in the technical performance of its network.

In the digest, we will also pay attention to the increased competition in the market of tokenized assets (NFT). The Solana blockchain over the past few months has been able to gain the status of one of the leading decentralized databases for transactions on NFT platforms.

Analysts at Chainalysis found that over the past few months, whales have accumulated cryptocurrency and periodically dumped only small amounts of it. However, in general, the cumulative trend continues to dominate.

Periodic selling only temporarily provoked a pullback in the market. Last week alone, wallets holding 1,000 or more coins bought an additional 142,000 BTC. Thus, about 200,000 bitcoins came under the control of the whales, which became a new record in 2021. Prior to this, the maximum was set in January, the Chainalysis team said in a report. Researchers believe that the use of cryptocurrencies has increased significantly over the past year.

“This confirms our view that bitcoin is increasingly viewed as digital gold. It is possible that institutions are making long-term deals with bitcoin,” the company said in a report.

Ethereum (ETH) is also on the rise, with its value rising to the highest level in its six-year history this week.

Tonight, the price of ether soared to $4,638. As the Santiment team notes, we saw a record in the entire six-year history of the altcoin. At the beginning of the American session, ETH corrected to $4,527, its capitalization is just over $541.08 billion. The number of addresses sending and receiving funds daily on the Ethereum network has grown by 45% in four weeks. Strengthening network activity creates conditions for a wider expansion of the cryptocurrency in the medium term, analysts predict. Impressive data leads Daniel Ferraro. According to him, since the beginning of the year, the number of holders of this coin has increased by more than 28%.

Thus, the number of addresses in the network that are in profit has reached 63.44 million. This is more than the number of profitable bitcoin wallets (38.62 million). ETH has been showing positive momentum for eight quarters. Even the systematic drop in the value of the altcoin could not annul its chances for a historic breakthrough. The bullish sentiment was recorded as early as the end of October, when the technical performance of the blockchain improved. In the Ethereum options market, hedge funds expect to hit $10,000 by the end of December, according to Deribit Insights.

Players purchase long-term call-contracts (buy) with strike prices ranging from $5,000 to $10,000 by the end of the current year. This means that investors expect a higher price of the cryptocurrency as early as the beginning of 2022.

Ethereum is currently the leading blockchain for the NFT token market. However, other platforms used by developers of tokenized assets and art objects literally breathe in the back of this network.

According to CryptoSlam, Solana has firmly established itself in the ranking of blockchains used by NFT market participants. The researchers found that the average transaction completed on this network grew to $1,500. In total, Solana NFT users made approximately 348,000 transactions, totaling up to $497.7 million.

Analysts recorded a record spike in activity on Solana in September. Then, for the first time, transactions worth almost $190 million were implemented on NFT platforms using the power of the SOL blockchain. However, this network is not yet able to compete with Ethereum. The volume of transactions on ETH exceeded $2.2 billion.

In the ranking of blockchains for the NFT market, Solana ranks fourth after Ethereum, Ronin and Wax, whose users have entered into transactions with tokens worth up to $37.7 million, $23.5 million and $4.5 million, respectively, in the last 24 hours. SOL users representing the ecosystem of non-fungible tokens made transactions for $1.9 million per day.

The most popular NFT project on Solana is Degenerate Ape Academy. It was he who ensured the sale of the coin since August in the amount of up to $105.9 million. Messari analyst Mason Nystrom notes that Solana clearly cannot compete with Ethereum yet. The SOL network is indeed growing rapidly, but it does not have enough popularity and capacity to receive a large number of projects representing the NFT market.

If you find an error, please select a piece of text and press Ctrl + Enter.