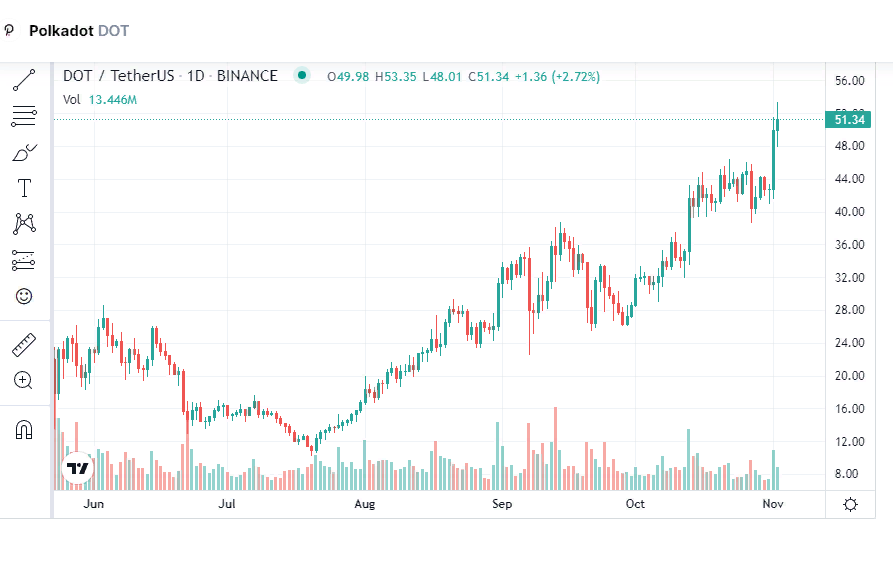 Of all the leading cryptocurrencies, Ethereum (ETH) and Polkadot (DOT) have updated records today. Bitcoin, on the other hand, has been stagnating over the past two days.

The coin is still holding above $60,000, but so far there are no signals for an imminent aggravation of volatility and an increase in its range of fluctuations. Meanwhile, the US authorities are seriously thinking about accelerating the implementation of legislation dedicated to stablecoins.

The Treasury Department calls on Congress and the government to step up work to ensure the transparency of transactions with digital currencies pegged to fiat money.

Another important phenomenon to watch out for is the trend towards an increase in the number of young Americans investing in the crypto sphere. Nearly half of the so-called millennials have already invested some of their wealth in digital assets. A similar propensity is observed among US citizens over 40 years of age.

Today, on some trading floors, ether (ETH) for the first time in its history exceeded $4,500. Thus, the leading altcoin was able to beat all its previous records.

As the Santiment team notes, increased demand for transaction processing has led to a sharp increase in fees. Now the average fee is over $50, and if it weren’t so high, network activity would increase much faster. In this case, the ETH rally would be backed by blockchain technicals. Some analysts do not rule out that Ethereum could not only exceed $5,000 this year, but also come close to $10,000. According to analysts at Goldman Sachs, Ethereum has every chance of becoming as attractive as Bitcoin. The top manager of the financial institution, Bernhard Rzimelka, who took part in the preparation of the note for investors, believes that the growth in the value of ETH will be caused by increasing inflationary risks, especially in the US. In 2021, the consumer price index in this country rose to 4.2%.

In this situation, the yield of traditional instruments will fall. Accordingly, hedge funds and individual traders will switch to an alternative in the form of cryptocurrency. Ethereum in this regard is regarded as one of the beneficiaries of the current market trend. Analysts at Goldman Sachs believe that the probability of a breakthrough altcoin to $8,000 this year is 80%. The key event will be the overshoot of $4,500, where strong resistance is expected.

Polkadot (DOT) token is also showing growth today. It broke above $53 for the first time in its history. During the previous May run, the cryptocurrency broke through the psychological $50 mark, followed by its crash to $11.9 in July 2021.

The increase in the cost of DOT is supported by technical indicators. The developers of the network are working on improving its functionality, which will make it compatible with third-party blockchains. Given that the underlying asset of the network is DOT, the value of the coin will grow as new users are attracted to the ecosystem. BTC is stagnating today. The cryptocurrency is holding above $64,000, but we are unlikely to see a repeat of the October run in the coming days. The capitalization of the crypto market on November 2 increased to 2.743 trillion, the Bitcoin dominance index is 44%.

49% of young Americans representing the so-called millennial generation prefer to invest in cryptocurrencies.

In addition to US youth, more mature Americans are increasingly investing in digital currencies, Bankrate’s research suggests. For example, 22% of respondents from the baby boomer generation (born in the post-war 1946-1964s) reported that they had invested in bitcoin and other cryptoassets.

12% of millennials are convinced that investing in digital currencies is the best way to save capital today. This group of Americans is of the opinion that you need to store virtual coins for at least ten years. 5% of baby boomers agree with this position.

The US Treasury has set its sights on stablecoins

Over the past few years, the American leadership has been debating the appropriateness of regulating the digital currency market. Supporters of the concept of crypto regulation advocate the transparency of such transactions, which will ensure the safety of investors.

The US Treasury has prepared a report for congressmen and the White House, in which it agreed with those who advocate the development of a regulatory framework for stablecoins. We are talking about digital currencies backed by US dollars or other assets. At the moment, the largest stablecoins are Tether (USDT) and USD Coin (USDC), whose capitalization exceeds $70.622 billion and $33.349 billion, respectively. Their influence in the global market is growing as traders use this type of coin to buy cryptocurrencies and store wealth digitally.

If now we do not address the issues of regulation of such instruments, then the state may face more important tasks, such as ensuring financial stability, the report of the Ministry of Finance says.

Regulators should set capital and liquidity standards to ensure the safety of financial institutions and ensure that issuers can meet their obligations to investors, the agency said.

If you find an error, please select a piece of text and press Ctrl + Enter.