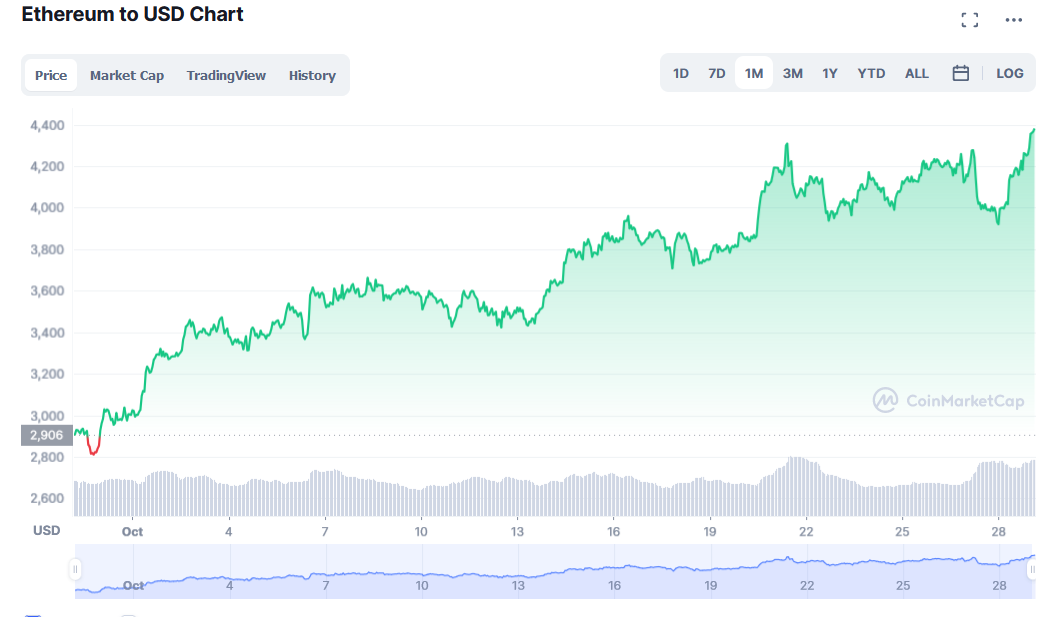 One of the most important events of the outgoing week was the breakthrough of the ether (ETH) to the highest values. Altcoin peaked at $4,416.05, but then began to correct.

Let’s take a look at the technical indicators of the Ethereum blockchain at the time of the cryptocurrency run, and also assess the general situation on the market on Friday, October 29th. Among other events, let’s pay attention to the ban on cryptocurrency by the Muslim community of Indonesia and the warning of the Bank of Russia about the dangers of investing in tokens deployed on gaming platforms.

Ethereum bulls are on the throne

On some exchanges this morning, the price of ether jumped to $ 4,416.05 – this is the maximum value in the history of cryptocurrency. However, the pressure from the sellers soon increased, and as a result, ETH began to retreat.

Now the coin is trading at $4,323, and, quite possibly, the altcoin will be able to reach $4,500 tonight. If this psychological mark transforms from a resistance zone into a foothold, then the ascent will continue, analysts say.

Ethereum was supported by bulls, who increased their purchases ahead of the October expiration of options on ETH. Open interest in this product reached its highest level since mid-May. Now the amount of outstanding contracts is $6.37 billion. Recall, according to ByBt, in May, open interest in Ethereum options exceeded $7.4 billion.

By the time the monthly options on ETH expired, the lion’s share of contracts were oriented towards a bullish scenario. Institutions are generally positive, they expect the $10,000 mark to be reached in December. The strike price in December options ranges from $5,000 to $10,000. The ratio of call options (Call) dominates Put-contracts (aimed at selling the asset). This situation reflects the optimistic mood in the institutional camp.

The wind of change

Today the session is going smoothly and no significant movements, with the exception of the breakthrough of the ether, have not happened yet. Bitcoin (BTC) fell to $60,755, its capitalization decreased to $1.15 trillion. Binance Coin (BNB) and Cardano (ADA) strengthened to $498 and $1.99 respectively.

Back in the middle of this week, the WhaleMap team, which analyzes whale activity, presented a chart with several Bitcoin support zones. The researchers hit the nail on the head, stating that the fall below $60,000 would be short-lived. They found that a large whale cluster formed around $59,865. Large investors who bought at such prices per coin did their best to bounce BTC. This is what actually happened, which gives us reason to declare the appearance of a fundamental value for BTC in the region of $60,000.

Central Bank as a gendarme

The Bank of Russia often reminds citizens that investing in digital currencies is extremely risky, as such instruments are volatile and have no collateral.

The head of the Central Bank, Elvira Nabiullina, categorically opposes the recognition of bitcoin as a means of payment in Russia. In addition, she recently ruled out the possibility of launching an exchange-traded crypto fund focused on digital currencies in the domestic market, following the example of the United States. This week, the Central Bank again pointed out to citizens the risks of buying innovative tools.

Valery Lyakh, representing the Department for Combating Unfair Practices, said that now scammers are launching various projects in the field of online games. Of particular concern to the regulator are applications deployed on the NFT market, where you can buy tokens. Such gaming services are used as a kind of financial pyramids, designed to attract as many people as possible.

Mostly young people enter this type of gaming platforms, and they also become victims of scammers. It is worth remembering that the administration of the resource is not responsible for the loss of funds, so no one can protect you if you lose money, Lyakh clarified.

Many religious organizations have previously repeatedly spoken out against the use of cryptocurrency. Now Indonesian Muslims have criticized the innovative tool. A branch of the Islamic organization Nahdlatul Ulama (NU) has published a fatwa, the essence of which is to ban any transactions with digital currencies.

A fatwa is a document approved by the clergy in accordance with Sharia – Islamic law. Moreover, the Muslim community urges believers to refrain from buying and using both bitcoin and other virtual coins. This is despite the fact that the Indonesian authorities have previously ruled out a scenario that unfolded in China, in which the country will follow the path of banning digital assets.

Muslim theologians believe that cryptocurrency resembles gambling, which is strictly prohibited by Sharia. However, in other countries where Islam is the official religion, such as Saudi Arabia, digital currencies are not prohibited. On the contrary, local authorities are stimulating the development of the cryptocurrency industry.