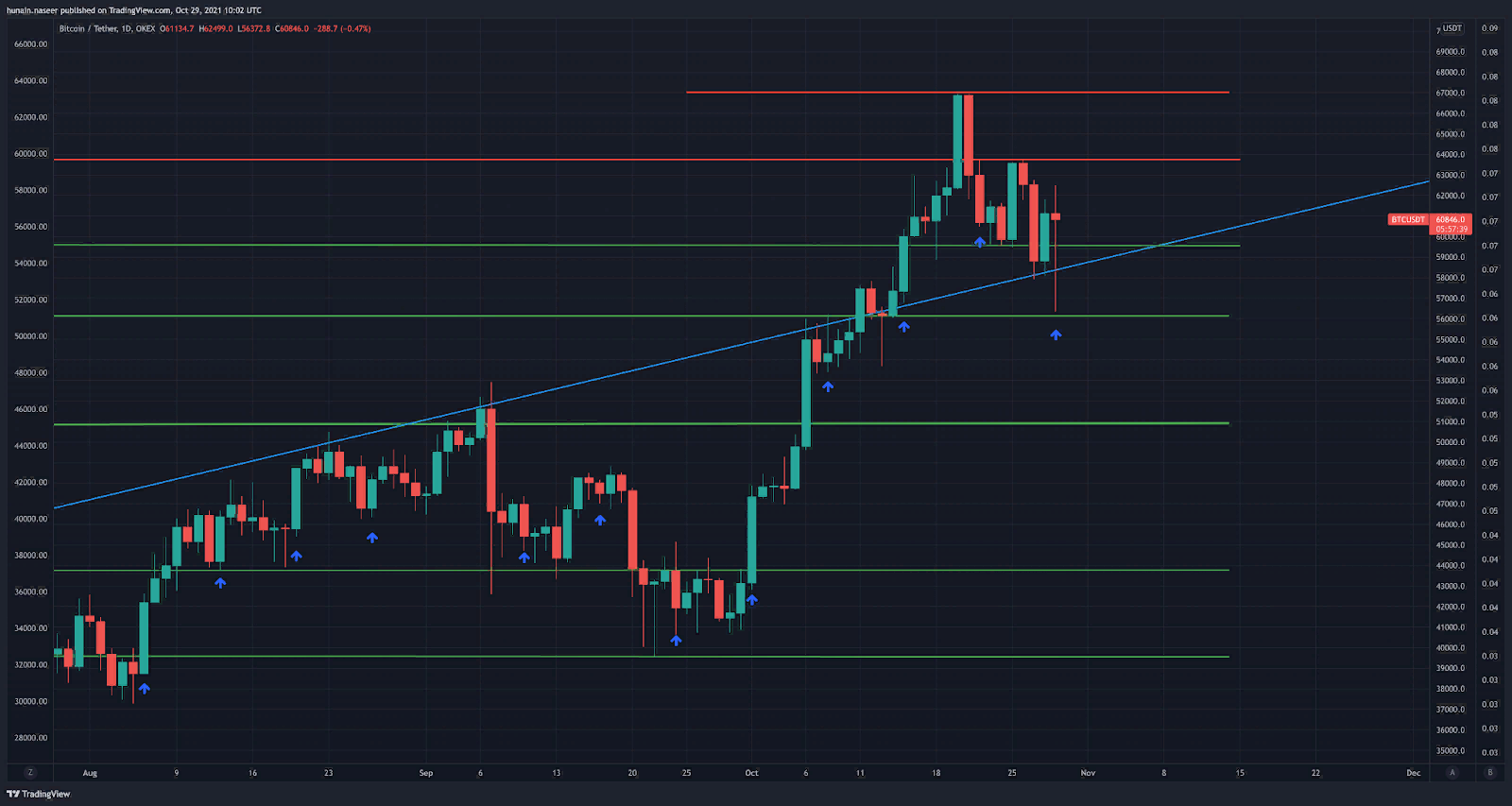 October turned out to be a very successful month for bitcoin and the crypto market in general. BTC was able to achieve very good results and meet its 13th birthday above $60,000.

October 31 is traditionally celebrated not only as the day of the appearance of bitcoin, but also of an entire financial technology designed to make a global revolution. The creator of BTC and the founder of the cryptosphere is the mysterious person Satoshi Nakamoto. Until now, nothing is known about this mysterious character, even whether it is one person or a group of like-minded people who want to digitalize the universe.

In the digest, we will try to understand the situation on the trading floors and evaluate the November prospects for the leading digital currency, as well as recall its October successes.

At the end of October 2008, an important landmark document was published on the World Wide Web, which went down in history as the White Paper (“White Paper”).

In fact, it was the manifesto of a new financial global system designed to make the digital currency – bitcoin – the main payment instrument in the world and push fiat money aside.

The author of this manifesto is the same Satoshi Nakamoto, who announced that the essence of the new concept is to make sending funds anonymous and as cheap as possible. To do this, in January 2009, the Bitcoin network appeared, which is designed to abandon intermediaries and provide Internet users with the ability to send funds directly to the recipient, no matter where in the world he is. Note that the initial price of the cryptocurrency was only $0.0008. The total number of BTC that will be put on the market is 21 million, of which 18.86 million coins have already been mined (according to the CoinMarketcap service).

Many cryptocurrency fans joined in the celebration of an important event and predicted the further growth of the BTC ecosystem. For example, Morgan Creek co-founder Anthony Pompliano has pledged to help all cryptocurrency developers with funds collected from his profits. He also launched a promotion dedicated to the famous bitcoin pizza story. Recall that on May 22, 2010, one of the Bitcoin developers – Laszlo Hanich – offered to deliver two pizzas to him, and in exchange he promised to send 10,000 BTC. This case went down in history as the world’s first purchase of goods for cryptocurrency, then it cost only $41. Thus, May 22 entered the annals of the cryptosphere as “Bitcoin Pizza Day”.

Now Pompliano wants to hold a similar action in 20 metropolitan cities. Exactly which ones, however, has yet to be specified.

The fourth quarter of 2021 started very successfully for the first cryptocurrency. In October, after the first bitcoin futures exchange-traded fund appeared, the price of BTC briefly approached $67,000 on some exchanges. Now it is trading at $61,589. The capitalization of bitcoin on Monday, November 1, reached $1.167 trillion.

According to the Kraken platform, in October, large investors, or the so-called crypto-kitties, began to more actively enter virtual assets. It was these players who created the conditions in which the value of BTC set a new record. The number of whale wallets holding at least 100 bitcoins increased by 1.6% last month to 16,156. Thus, the giants now control BTC worth more than $724.4 billion. The stocks of medium-sized investors are also growing. The number of addresses controlling at least ten coins hit a three-month high of 147,658, according to Glassnode.

Kraken believes that the fourth quarter will be as successful for Bitcoin as it was in 2017. Only then the value of the digital currency skyrocketed due to speculative activity, and now its growth will be backed up by technical factors – above all, the institutional adoption of the asset.

The ratio of long and short positions in the futures market is still above one. According to OKEx Insights analysts, if this indicator exceeds one point, then institutional investors prefer to bet on long-term growth in the value of the asset. This is exactly the behavior of the players we are now seeing.

At the end of last week, the ratio of longs and shorts (long and short positions) peaked at 1.4 points. Then this indicator contracted, and as a result, we saw a short-range game with a subsequent correction in the price of BTC.

This situation could be caused by the expiration of contracts in the derivatives market. Traditionally, at the end of each month, volatility escalates due to the pressure of bulls and bears, but then the situation stabilizes. Bitcoin was able to end October at values ​​above $60,000, and the prevailing opinion among analysts is that the cryptocurrency will be able to reach $80,000 in November.

Note that Bloomberg strategist Mike McGlone in the summer announced the possibility of Bitcoin reaching $100,000 by the end of this year.