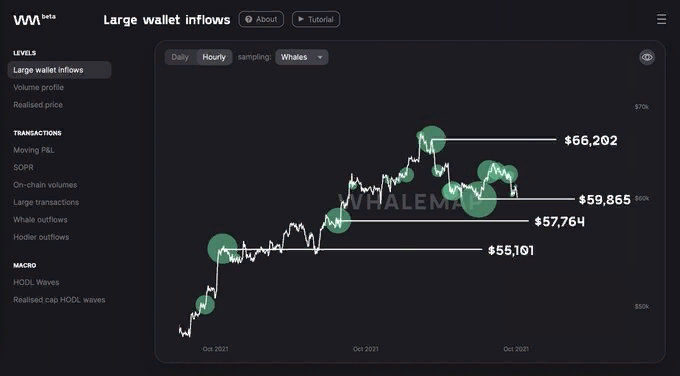 The retreat that began the night before continued today. Bitcoin not only failed to stay in the $60,000 area, but also ended up in a deeper correction zone. Selling, arranged by short-term traders, led to the fact that not only BTC, but also altcoins began to lose positions.

The biggest coins are currently trying to find footholds in order to consolidate again and rebound. They can get support during the American session, as investors from Canada and the USA traditionally prefer to bet on risky assets.

In addition, in the digest we will pay attention to the situation in Latin America and try to evaluate the steps of the European Central Bank, accelerating the plan to create a digital euro.

Another attempt to find the bottom

The crypto market on Wednesday, October 27, is falling. Alarm signals appeared at the beginning of this week. Investors began to send cryptocurrencies to exchanges, however, mainly speculators who wanted to make money on the October run of bitcoin switched to sales.

The hodlers dumped only part of the coins and refrained from aggressively selling them. This is evidenced by data from Glassnode. Cryptocurrency holders currently control about 13.34 million BTC. Long-term investor holdings have grown by more than 2.4 million bitcoins since March. But it adds the Shiba token, which recently reacted sharply to Elon Musk’s tweets. At the beginning of the North American session, the price of this altcoin rose to $0.000057 (+19%).

Within the next few hours, Shiba may knock DOGE out of the top 10 altcoins. The capitalization of the crypto market is just over $2.466 trillion, the Bitcoin dominance index has decreased to 44.9%.

At what level should BTC bounce?

The fall in the value of the cryptocurrency led to the forced liquidation of positions in the futures market. After a pullback below $59,000, exchanges canceled positions totaling up to $846 million, according to CryptoRank. Slightly more than 88% of them were long (long). In such price areas, large whale clusters have formed. Accordingly, investors who purchased coins at the above rates will make every effort to prevent a deeper correction, experts say.

Digital euro on the way?

The European Central Bank has repeatedly announced its intention to accelerate the implementation of the plan to create a digital version of the euro (CBDC). This week it became known about the creation of an expert group that will develop a plan to modernize the infrastructure with the subsequent integration of the token into the banking sector.

The group of the so-called advisory council included representatives of several organizations and departments, such as BBVA, CRIF and Stripe. The first meetings will begin in November this year. The council consisted of 30 people. This structure will not have any legal authority, all their work is only advisory.

Fabio Panetta, who is on the board of the European Central Bank, expressed hope that the implementation of the project to launch the CBDC will accelerate.

“We need to hear the opinion of a large number of experts. Only through discussions will we be able to develop the most effective plan for the introduction of an innovative tool in the European market,” the official believes.

Latin America as a territory of crypto-freedom

The landmark event of this summer was the recognition of bitcoin as a means of payment in El Salvador. Uphold platform CEO J.P. Thierro believes that other Latin American countries can become a haven for the cryptocurrency business.

In this region, many states are experiencing economic difficulties. The solution to their problem could be the legalization of bitcoin and the cryptocurrency business. In addition to El Salvador, Colombia and Venezuela, whose residents have been using cryptocurrency for a long time, will be able to move along the path of BTC recognition.

The local population will welcome the liberal steps of their governments. According to the head of Uphold, of the seven million users of his platform, 1.7 million are Latin Americans. He believes that there is no need to create national digital currencies (CBDC). It is enough to use those cryptocurrencies that are already on the market.