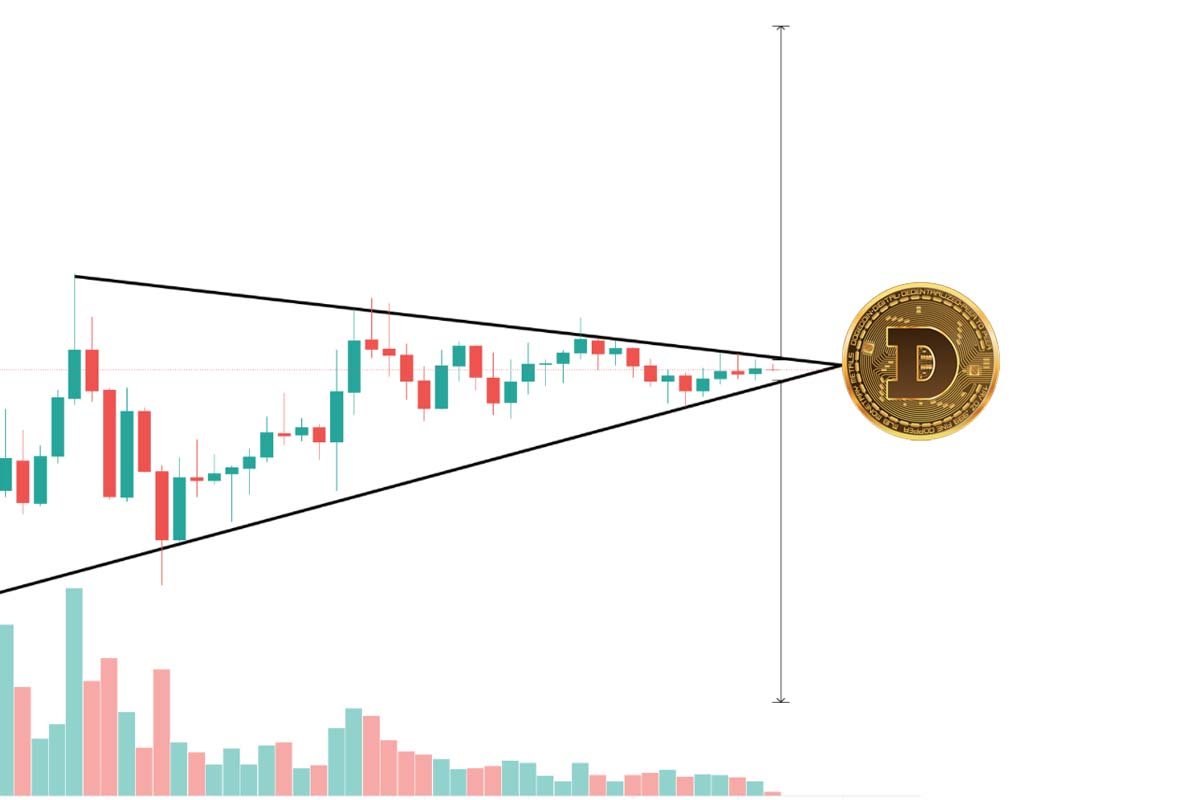 Here are 10 reasons why Dogecoin is so cheap:

Now that we have the reasons behind the inexpensiveness of Dogecoin, let’s take a deeper look at how and why Dogecoin came to be a cheap cryptocurrency.

There’s no maximum limit to the amount of Dogecoin that can be created and in circulation. The process of obtaining Dogecoin is through mining new blocks, which holds 10,000 coins. On average, 14.4 million coins are being mined a day, with over 130 billion in total circulation.

The popularity for the digital currency grew quickly through the subreddit r/Dogecoin on Reddit, a million visits to Dogecoin.com within the first month, and there was even a sponsored Dogecoin NASCAR race car added in 2014.

Dogecoin had its most significant surge in early 2021 thanks to being heavily publicized by celebrities such as Snoop Dogg and Elon Musk via Twitter. Mark Cuban, owner of the Dallas Mavericks, announced the team would be accepting Dogecoin as payment for game tickets and products.

So, Dogecoin has reached celebrity status on the internet. Unfortunately, the fame hasn’t translated over to being known as a serious cryptocurrency for investors.

Depending on the cryptocurrency you hold, transferring those coins over to actual physical currency can still be a bit complicated. As opposed to the stock exchange and shareholding, digital currency is still a young market and hasn’t gained the respect and trust of the investor majority.

Cryptocurrency is a decentralized form of payment. This means that transactions are performed in a peer-to-peer network with no middleman in between, unlike the stock market, which has an exchange that works as the mediator for trade deals. Decentralized cryptocurrency also means you’re not dealing with banks or any other third party, and coins can be exchanged from seller to seller.

Although there are advantages to decentralized payment, the main disadvantage is there’s no authority or overseeing factor to monitor deals taking place, which could prove tumultuous if legal action needs to be taken in a transactional situation.

For this reason, cryptocurrency isn’t accepted as a form of payment everywhere. It also depends on the type of digital coins you have. As the digital currency with the highest value, Bitcoin will be accepted in more markets and platforms than other altcoins. On the other hand, Dogecoin isn’t as widely accepted, but this may change in the future.

For now, Dogecoin is mainly used for trading for products or services through online media-sharing forums like Reddit and Twitter or used as a tipping system, with coin holders being able to tip each other for services.

In digital currency, Bitcoin is still the highest-value cryptocurrency that’s being traded. All other currencies are similar to Bitcoin, but they’re called altcoins. There are many different types of altcoins out there, such as Ethereum, Litecoin, Cardano, and the list goes on.

Each altcoin tries to make themself unique so that they can stand out from the rest and hope to rise in surges so that they may rival Bitcoin. Dogecoin is also one of them, although the “uniqueness” of Dogecoin is that it’s based on a joke for the most part.

Despite the popularity of Dogecoin and celebrity endorsements, the coin hasn’t had much success in creating a return on investment for the majority of coin holders. (This may not be a problem for the sizable number of investors who bought small amounts of Dogecoin as a “much wow” joke).

For now, investors aren’t buying into Dogecoin due to the cheap price and because there are more promising competitors out there.

Although there have been campaigns to raise the price of Dogecoin to $1 in an effort to mirror the effects of the Gamestop craze in early 2021, the coin hasn’t been able to meet these goals yet. This is primarily due to the fact that there’s an overly abundant surplus of coins in circulation.

Due to tweets and popularity generated from Elon Musk, even announcing a SpaceX rocket that’ll be paid for entirely by Dogecoin set to be launched in 2022, Dogecoin has continued to increase in value in 2021. It hit an all-time high in May with a $0.74 per coin. As of August 2021, though, it has decreased in value to around $0.32 per coin.

Despite the fame and popularity of the humorous Dogecoin, never-ending serious competitors, and a surplus of coins being created indefinitely, it’ll continue to remain cheap.

Dogecoin has no maximum limit of how many coins are in supply. Currently, there are 130 billion coins out there, with more coming in each day. Because of this gradual and constant increase of Dogecoin’s supply, the currency is inflationary.

Inflationary refers to the fact that there’s no limit to how much supply can be available at any point in time. On the other hand, Bitcoin is categorized as deflationary due to its limit on supply.

Simply put, by its very nature, your share of Dogecoin will become less valuable over time as more Dogecoins enter the market.

6. The Demand Will Never Catch Up to the Supply

Because of its inflationary qualities, the ever-growing supply of the currency won’t be able to outgrow the demand for Dogecoin.

Bitcoin, for example, has a maximum supply limit of 21 million coins. There are already 18.5 million in circulation, and the rest are predicted to be added over time by 2040. Bitcoin has an extremely high demand for this supply because of this limit on coins.

Since Dogecoin doesn’t have a limit on supply, demand won’t ever be able to reach the level set for Bitcoin. Similar to situations where a store has an overstock of an item, they’ll put that item on sale or clearance and sell it for a cheaper price. The larger the supply grows of Dogecoin, the price will always stay cheap.

If you take a look at the Dogecoin image of the coin logo, you might notice the face of a humorous meme that features a Shiba Inu dog called “doge.” This meme has met with an enormous amount of fame and popularity on the internet as well as online posting forums such as Reddit.

The meme itself has become a template to write shortened phrases in a Comic Sans font that seem to say what the dog is thinking. Even around the edge of the physical Dogecoin are phrases in the style of the meme: “wow much coin how money so crypto.”

Interestingly, there’s a Dogecoin Commemorative Coin you can purchase on Amazon.com. It has gained the attention of famous celebrities such as Elon Musk, who regularly has posted on social media about Dogecoin, which has also been attributed to surges in its value in the Spring of 2021.

To understand why Dogecoin isn’t taken as seriously as other cryptocurrencies, you have to look back at its beginning: Dogecoin was created as a joke by software engineers Billy Markus and Jackson Palmer back in 2013 as a parody of Bitcoin. Because of the popularity of the meme and the joke itself, people started to purchase Dogecoin.

It eventually caught on to become a more accessible, user-friendlier approach to trading in cryptocurrency.

8. There’s Too Much Risk Involved in Investing in Dogecoin

Cryptocurrency, like any investment, has its fair amount of risk factors. The market can be extremely volatile, which refers to the unpredictability and split-second changes that can happen when investing in digital coins.

The highest traded cryptocurrency, Bitcoin, can even experience extensive surges and dips, all within 24 hours. Digital currency is still a fairly new market, and for this reason, investors are wary of buying.

Out of all of the cryptocurrencies available for purchase, Dogecoin has become one of the most popular and funniest digital coins out there. However, while everyone likes a good laugh, they may not want to take the risk with their cash in investing in a cryptocurrency that was solely created as a joke.

The question of what will happen if the popularity of Dogecoin goes away and celebrities such as Elon Musk lose interest is also something to consider when weighing the risks. If the interest isn’t there, Dogecoin may not be a sound investment.

9. Dogecoin Is Owned by Few, Not by Many

The ownership of Dogecoins isn’t precisely well balanced. In a report by the Wall Street Journal, it was revealed that there’s one solitary investor that holds about 28% of all Dogecoins, which is worth about $2.1 billion.

Almost all of the rest of Dogecoins’s investors hold about 0.002% of the total coin supply, which makes up about 66% of all coin holders. This means that 33% of investors hold coin ownership of the majority of Dogecoin.

Due to the uneven distribution, this can prove to be a lot riskier for holders that have a smaller amount of coins. However, Elon Musk, who has become a major supporter and advocate for Dogecoin, made this statement on Twitter: “If major Dogecoin holders sell most of their coins, it will get my full support. Too much concentration is the only real issue IMO.”

Although Musk is more interested in serious digital currencies such as Bitcoin, his influence over Dogecoin has been prevalent whenever he discusses the coin during public appearances, with positive outcomes. Whenever Musk tweets about it, this tends to be responsible for a surge in coin value.

Although Dogecoin was first created as a parody for other cryptocurrencies and wasn’t meant to be taken seriously, it has become a profitable investing tool for some of its coin holders.

There are some speculators that see it more as a scam or pyramid scheme since there’s no real profit to be made for the majority of holders.

Even the co-creator of Dogecoin left cryptocurrency in 2015 after making criticisms as to what Dogecoin had become. In a statement posted to Twitter, Jackson Palmer proclaimed that cryptocurrency is “an inherently right-wing, hyper-capitalistic technology built primarily to amplify the wealth of its proponents.”

The problem that makes Dogecoin unappealing to new investors is that a small number of all coin holders hold the majority of the coin supply. So, for new coin holders, they’re essentially making the earlier purchasers richer by adding to their massive amounts of coinage and not contributing to their own smaller amounts.

Dogecoin is also shared as a meme on the internet and endorsed by wealthy celebrities, which has suspicious similarities to pyramid schemes. These endorsements attract the attention of novice crypto buyers but arouse the suspicions of serious investors.